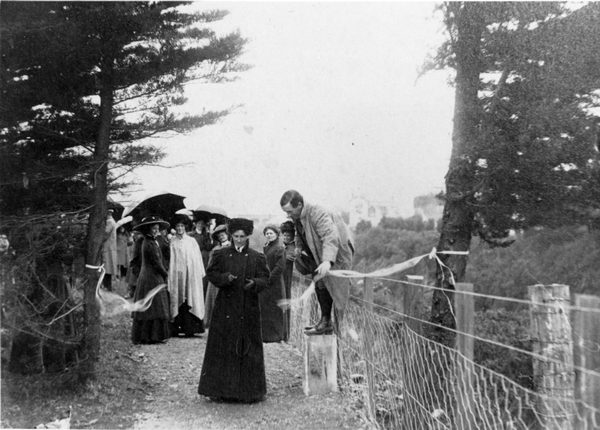 Eketahuna Mayoress Maud Page cuts the ribbon at the opening of the Cliff Walk, Eketahuna. Mayor Cliff Page is standing beside her on the box.

The women behind her, left to right, are Madge Seymour, Mrs Hotop, Matilda and Alice Anderson, Mrs Charlotte Turner.

The coronation of King George V and Queen Mary in 1911 was a great occasion for Eketahuna. As part of the town's celebrations the Cliff Walk was opened.

The Cliff Walk begins by the bridge in Bridge Street, Eketahuna, and is a pretty scenic walk above the Makakahi River.

Popular posts from this blog

There passed away at his residence, "Llandaff," Upper Plain, at an early hour yesterday morning, one of the oldest and most esteemed settlers of the District in the person of Mr. Edwin Meredith. The deceased had been ailing for some time, and death was due to an internal complaint. The late Mr. Meredith was one of the pioneer settlers of the Wairarapa. He was born in Tasmania in 1827, his father, Mr. George Meredith, who at one time held a commission in the Royal Marines, having chartered the ship Emerald, and sailed for Hobart six years previously.The deceased visited New Zealand on two occasions before finally settling in the country. The first visit was in 1850 in H.M.S. Bramble. and at the time of that visit the Canterbury settlement was being formed, the fifth immigrant ship having only just arrived from the old country.

The second visit of Mr. Meredith to New Zealand was a year later than the first. He came …
Post a Comment
Read more

With huge piles of brick and masonry sprawling across the footpaths and roadway, shattered shop windows, and trailing high-tension lines, the condition of the mile-long thoroughfare was testimony to the intensity of the previous night's earthquake. In the residential areas householders suffered considerable damage to property, and it appears that Masterton took the main shock. Miraculously no casualties of any sort have been reported.

In January 1916 the biggest army training camp in New Zealand opened in Featherston. The camp occupied the land on both sides of the main road between Featherston and Tauherenikau. In 1916 the camp was the biggest settlement in the Wairarapa at a time when Masterton’s population was 5,500. It covered almost 30 hectares. Today there is only a memorial to the camp by State Highway 2.