Getting the wool to market: Flat Point, 1920s

The isolation and lack of effective road and rail systems meant that for many farms and sheep stations wool was the number one product. The coastal shipping network was the most effective form of transport, used to take wool to market and to receive supplies.

Bullock teams were widely used: they were strong, could move large loads and their cloven hooves enabled them to cope with muddy roads which turned to a quagmire in winter. As well as moving wool, bullock teams--led by a "bullocky"--were used in milling native timbers and other agricultural activities. 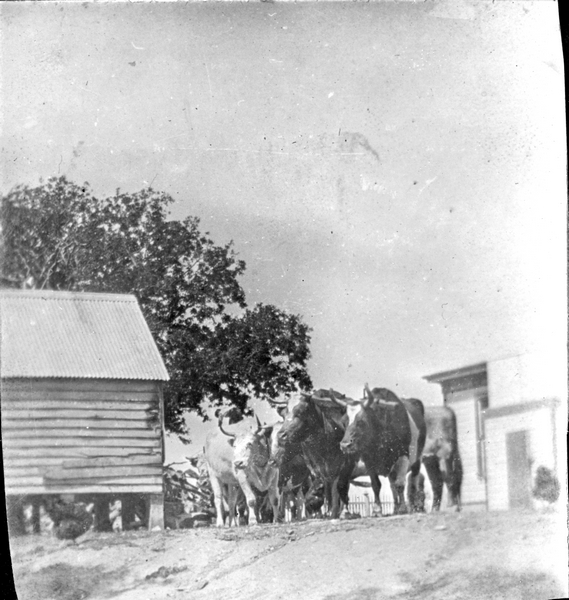 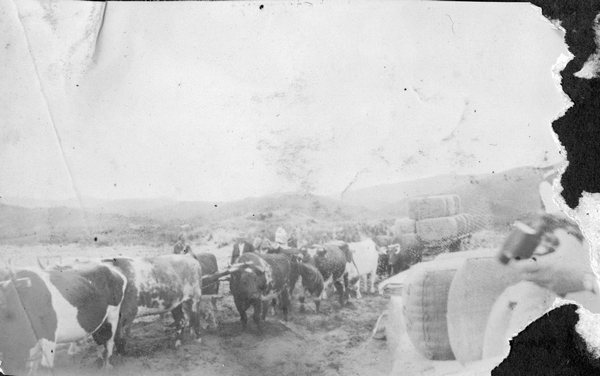 The exposed coast at Flat Point was navigable only by small boats so steamers waited offshore while surf boats rowed the cargo from the jetty to the steamer. In the above photo the bullock team is hauling the wagon with the wool bales alongside the jetty where it was unloaded. - 05-60/8.digital 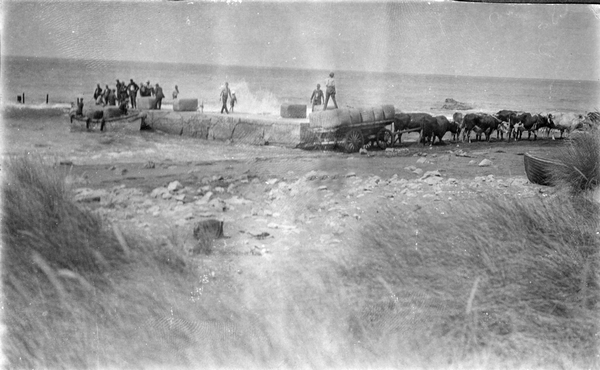 The bullock team and wagon-load of wool bales alongside the jetty being unloaded. Further along the jetty the surf boat is being loaded with bales. 05-60/26.digital 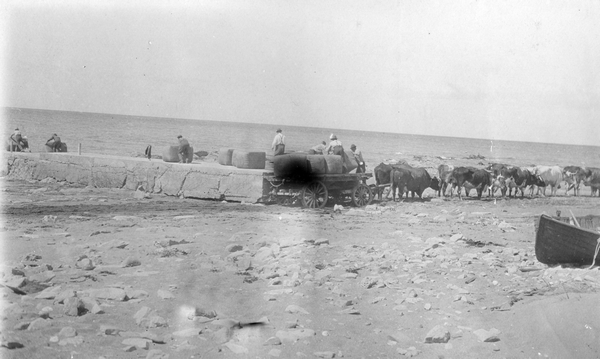 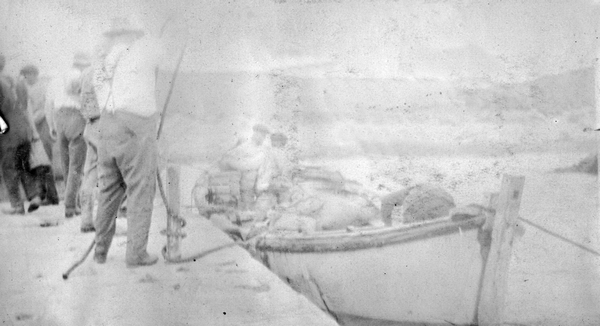 The surf boat alongside the jetty, being loaded with wool bales - 05-60/7.digital 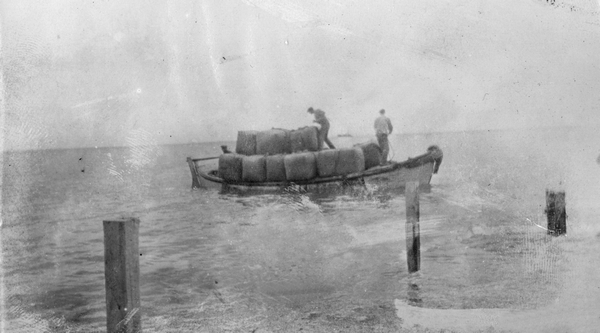 A surf boat laden with bales leaves the jetty for the steamer--some way off-- which can be seen on the horizon between the two men.  05-60/9.digital 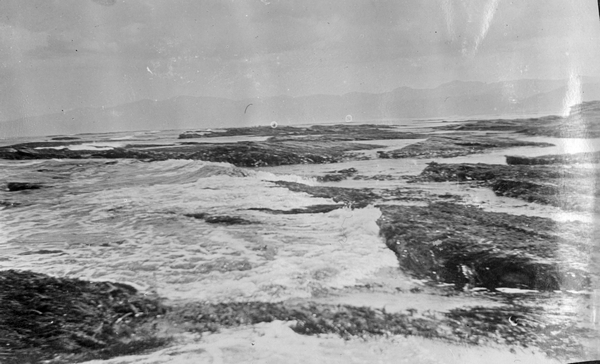 This 1920s photo of the reef at Flat Point highlights the ruggedness of the coast. 05-60/17.digital 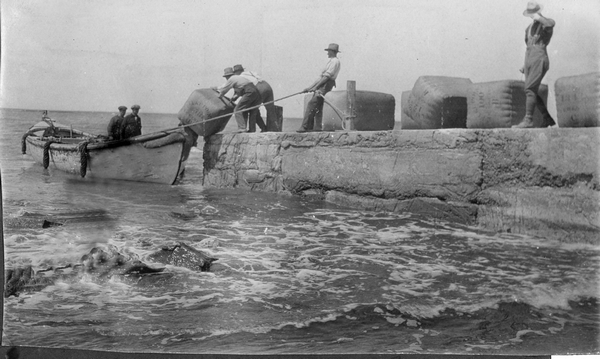 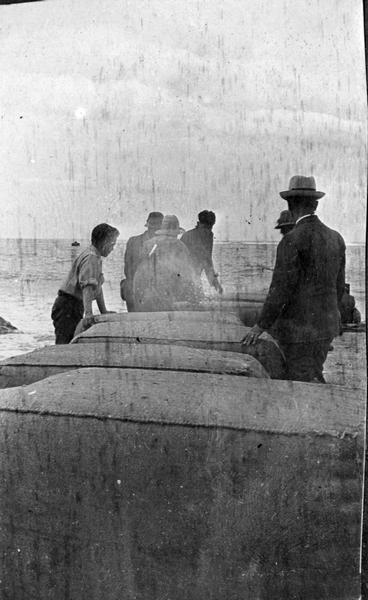 Bales lined up along the jetty awaiting shipping. 05-60/24.digital 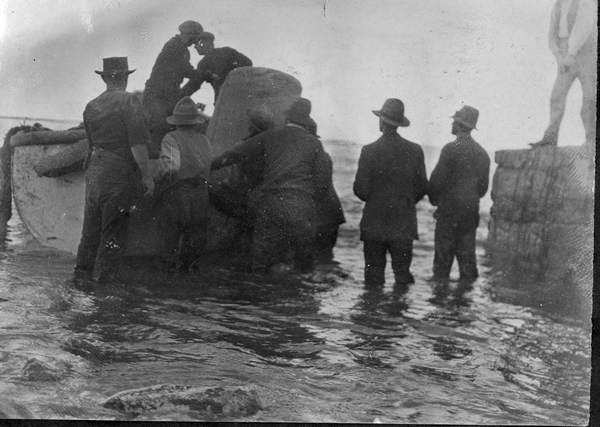 This photo suggests that the tide may have dropped which meant the surf boat wasn't able to come alongside the jetty. It appears the bales would have had to be carried from the end of the jetty to the waiting boat. 05-60/27.digital 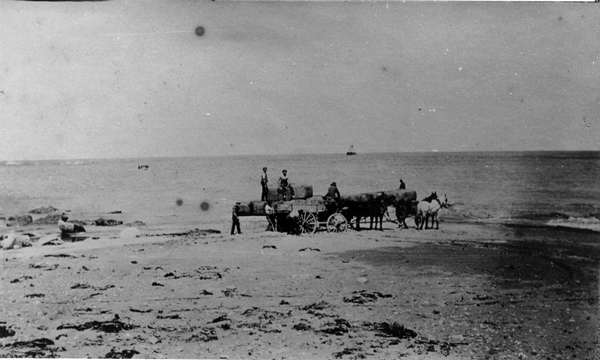 In this photo a team of horses and a cart is alongside the jetty. It is unclear whether this team was used to transport wool bales.  In the background the surf boat can be seen, together with the steamer waiting offshore. 90-017/994

Popular posts from this blog

There passed away at his residence, "Llandaff," Upper Plain, at an early hour yesterday morning, one of the oldest and most esteemed settlers of the District in the person of Mr. Edwin Meredith. The deceased had been ailing for some time, and death was due to an internal complaint. The late Mr. Meredith was one of the pioneer settlers of the Wairarapa. He was born in Tasmania in 1827, his father, Mr. George Meredith, who at one time held a commission in the Royal Marines, having chartered the ship Emerald, and sailed for Hobart six years previously.The deceased visited New Zealand on two occasions before finally settling in the country. The first visit was in 1850 in H.M.S. Bramble. and at the time of that visit the Canterbury settlement was being formed, the fifth immigrant ship having only just arrived from the old country.

The second visit of Mr. Meredith to New Zealand was a year later than the first. He came …
Post a Comment
Read more

With huge piles of brick and masonry sprawling across the footpaths and roadway, shattered shop windows, and trailing high-tension lines, the condition of the mile-long thoroughfare was testimony to the intensity of the previous night's earthquake. In the residential areas householders suffered considerable damage to property, and it appears that Masterton took the main shock. Miraculously no casualties of any sort have been reported.

October 08, 2012
Shows left part of Masterton panorama, looking west, from near the area of Bannister and Hessey Streets. A number of houses are in the foreground, with two-storey buildings in the distance along Queen Street. Taken from new gas storage tank - 97-151/114